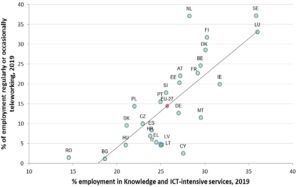 The lag in digital proficiency experienced by many EU societies is firstly and foremost a direct function of an overall skills gap that affects young as well as senior citizens.The human capital seems most important barrier preventing Member States from the Mediterranean and Balkan areas to fully embrace remote working paradigms as new concrete opportunities for education, employability and capacity building. These societies seem to lack the necessary resources (e.g., culture, mindset and training) to fully upgrade their models towards the same horizons currently pursued by northern societies.

The detailed analysis revealed that while all EU Members States invested heavily in past years in new connectivity infrastructures as a way of adapting to novel technological developments, some countries were also making sure that the IT development at national scale was accompanied by a mindset development at social and economic level, empowering and upskilling people’s digital skillset coherently with the new emerging scenario. The report also hints that part of reason for these gaps might lie in the economic structure differences. Mediterranean and Balkan’s economies rely on labour-intensive sectors /industries that by nature do not exploit/ depend on digital technologies as much as capital-intensive sectors/industries, which are instead predominant in leading economies. 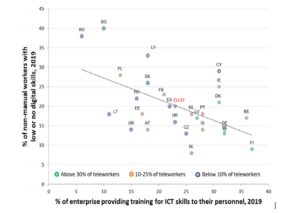 The report provides assessment of different educational and training frameworks suitability in creating content relevant for virtual teamworking skills development with particular focus on DigComp, The European Digital Competence Framework. As the official EU framework for training and education on digital skills and ICT proficiency, DigComp can serve as a strategic reference to identify: critical training areas of intervention, expected learning outcome, assessment and parameters for monitoring/evaluation of newly acquired competences. Full text of report can be found in the attachment. Full report can be found in the attachment.